“A complex, densely peopled and relentlessly gripping political, cultural, and military history of America from the build-up to the Civil War to the crumbling of Reconstruction in its aftermath…Magnificent.”
—Geoff Dyer, The Guardian‘s Best Books of 2013

“A book written in the style of Van Wyck Brooks, Doris Kearns Goodwin and Carl Sandburg, with a dash of David McCullough…Wineapple provides the smell and the feel of the era. And besides two of the five senses she engages the mind…Indispensable.”
— The Boston Globe

“Wineapple’s own literary talents are on full display, as well. She is a beautiful writer, at once lyrical and measured….In providing a sense of the possibilities and tragedies of the era, of its passions and disappointments, Wineapple has given us a memorable book.”
— Christian Science Monitor

“A marvelous survey of both familiar and unsung American stories, contextualized and framed within one sweeping canvas.”
— Publishers Weekly Starred Pick of the Week 5/13

”A rich, beautifully told chronicle of American politics and society between 1848 and 1877.”
— Judith Thurman, NewYorker.com

“…Wineapple’s history creatively quavers with the tensions of the transformative times.”
— Booklist

“History on the grand scale, orchestrated by a virtuoso.”
— Starred Review, Kirkus

“In this splendidly lyrical portrait of the decades that encompass both the Civil War and Reconstruction, Brenda Wineapple has distilled the turbulent spirit of mid-19th century America, both in its lofty aspirations and sordid compromises, with the most uncanny exactitude. Beautifully written, artfully constructed, and passionately argued on every page, Ecstatic Nation stands forth as a model of narrative history.”
— Ron Chernow, Pulitzer-prize winning author of Washington: A Life

“[Wineapple’s] powerful prose takes the pulse of a nation unmaking and remaking…readers looking for a reliable, readable, and riveting story of the people and process of Wineapple’s chosen era will find this title well worth the ride.”
— Library Journal

“Ecstatic Nation is a wonderful, unconventional narrative history of the Civil War era, laced with finely-grained sketches of fascinating, conflicted people and harrowing events. Wineapple writes with a conversational and even cinematic verve about a dark but transformational tragedy. With her keen eye for the poignant vignette and her deep reading and research, she delivers for even the most avid readers about this era a series of surprises, as well as an understanding of the death not only of compromise, but of the first American republic. This is the art of history informed by learning and written with style.”
— David Blight, author of Race and Reunion, winner of the Bancroft Prize and Director of the Gilder-Lehrman Center for the Study of Slavery

For America, the mid-nineteenth century was an era of vast expectation and expansion: the country dreamed big, craved new lands, developed new technologies, and after too long a delay, finally confronted its greatest moral failure: slavery. The award-winning historian and literary critic Brenda Wineapple explores these feverish, ecstatic, conflicted years when Americans began to live within new and ever-widening borders, both spiritual and geographic; fought a devastating war over parallel ideals of freedom and justice; and transformed their country, at tragic cost, from a confederation into one nation, indivisible.

Populated by idiosyncratic, unforgettable characters like P.T. Barnum, Walt Whitman, George Armstrong Custer, Elizabeth Cady Stanton, and Jefferson Davis, Ecstatic Nation moves from the zealous debates about slavery through the devastation of the Civil War. It explores the terrible complexities of Reconstruction and the fledgling chance that women would share equally in a new definition of American citizenship. Breathtaking in sweep and scope, it traces the lust for land and the lure of its beauty from a frenzied rush to riches to the displacement of Indians. And it takes us forward—toward the promise of a more perfect Union for all.

A masterful synthesis of political, cultural and intellectual history, Ecstatic Nation is a spellbinding tale of America—its glory and greed, its aspirations and humiliations—in this exhilarating and momentous period.

“This is a marvelous book. With narrative grace and sure-handed scholarship, Brenda Wineapple has written a compelling account of an epochal (and too little understood) age. From the death of John Quincy Adams through the Civil War to the tragedy of Reconstruction, Wineapple tells the American story brilliantly.”
—Jon Meacham, Pulitzer-prize winning author of Andrew Jackson: American Lion

“Ecstatic Nation is a brilliant portrait of American society in the mid-19th century–a time of slavery, war, emancipation, and national re-invention. Wineapple’s deep research, deft characters studies, and rich and nuanced storytelling bring this transformative period alive. A must read for all lovers of American history.”
—Annette Gordon-Reed, Pulitzer-prize winning author of The Hemingses of Monticello

“There are good storytellers and there are good historians. Brenda Wineapple is both. Ecstatic Nation tells the story of the Civil War, from its origins to its aftermath, by telling a series of stories about the fascinating people and extraordinary events of that time. Beautifully written and grounded in a prodigious mastery of the material, there is no other book like it. Seasoned scholars will be impressed. Interested readers will be riveted.”
— James Oakes, winner of the Lincoln prize for Freedom National

“This remarkable, mesmerizing book takes the pivotal crisis of American history and creates a glowing tapestry in which human figures with names we all know, but don’t know well, stand out and are fitted into a magnificent, panoramic view of what our nation had to endure. For many of us, the years before and after the war have seemed hollow and empty, presided over by dreary, cowardly men. No longer, thanks to this book’s impeccable scholarship, vivid characterizations, and masterful storytelling.”
—Robert K. Massie, Pulitzer-prize winner and author, most recently, of Catherine the Great 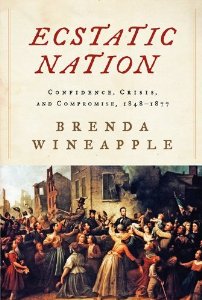