GENÊT: A Biography of Janet Flanner

The daughter of a doomed Indianapolis mortician, Janet Flanner really began to live at the age of thirty, when she fled to Paris with her female lover. That was in 1921, a few years before she signed on as Paris correspondent for The New Yorker, taking the pseudonym Genêt.  And then, for half a century, from 1925-1975,  as the author of The New Yorker’s letters from Paris, Janet Flanner described with matchless elegance and clarity the political, artistic, and social life of France—its culture, its celebrities, its scandals, its march toward war and occupation.  She knew and saw everyone and everything, from Edith Wharton to Ernest Hemingway, from Charles Lindbergh to Charles de Gaulle, and with deft precision, she even profiled Hitler.

Janet Flanner’s personal life was passionate, complex, and as colorful as her public life, for in Paris she found the freedom to live and love as she chose.  Genêt chronicles Flanner’s lifelong relationship with Solita Solano and the sometimes turbulent, always deeply felt love affairs of her later life.  Flanner tried to keep these relationships separate by commuting constantly from Paris to New York to Rome and back, but the balance was a precarious one not without pain.

A chain-smoking, hard-driven perfectionist, Flanner won the 1966 National Book Award for Paris Journal, her riveting account of the years just after the Occupation, and with Paris Was Yesterday, she herself became a cultural monument, known for probity and wit.  In this captivating literary biography, Wineapple brings to life the intense, compelling stylist, sporting a monocle, who came to be synonymous with our bittersweet, romantic view of America in Paris between the wars.

Praise for Genêt: A Biography of Janet Flanner

“Wineapple has written a wonderfully perceptive and moving biography of Janet Flanner.  I hated to finish it.”
—May Sarton

“How Brenda Wineapple understood Genêt and her times is almost uncanny.  She writes of them with clarity and accuracy in a style that is almost startling in its simplicity.  The book is a triumph from any conceivable point of view….“
—Kay Boyle

Critics’ Choice: The Los Angeles Times.  “Wineapple has documented the life and world of a writer whose journalistic style, urbane and ironic, remains an antidote to gonzo journalism and related disorders.”
—Nancy Mairs

“A good book to read at this time, with Europe once again undergoing kaleidoscopic change.  At her best, Janet Flanner vividly described what we all must remember if history is not to repeat itself.”
—Jane O’Reilly, Newsday 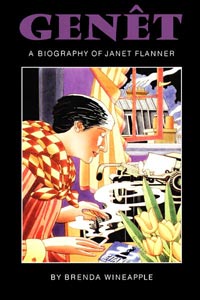