Handsome, reserved, almost frighteningly aloof until he was approached, then playful and cordial, Nathaniel Hawthorne was a mercurial and double-edged as his writing.  “Deep as Dante,” Melville said.

Hawthorne himself declared that he was not “one of those supremely hospitable people who serve up their own hearts, delicately fried, with brain sauce, as a tidbit” for the public.  Yet those who knew him best often took the opposition position.  “He always put himself in his books,” said a sister-in-law.  “He cannot help it.”  His life, like his work, was extraordinary, a play of light and shadow.

He also shoveled dung in an attempt to found a new utopia at Brook Farm and then excoriated the community (or his attraction to it) in caustic satire; and the confidant of Franklin Pierce, fourteenth president of the United States and arguably one of its worst, he was also the friend of Emerson and Thoreau and Melville who, unlike them, made fun of Abraham Lincoln and who, also unlike them, wrote compellingly of women, deeply identifying with them.

Born Nathaniel Hathorne in Salem, Massachusetts, in 1804, the reluctant hero of Wineapple’s tale was always a man apart, one who believed that the writer was “a citizen of another country.“

With a taste for drama but filled with self-doubt,  Hawthorne burned much of his early work, then took a job as a customs inspector “not because he needed the money or because the country ignored its artists—though both were true—but because he liked it,” as Wineapple writes,  and went on to write an exquisite body of short stories and novels that, though now mainstays of American literature, sold little during his lifetime.   Hawthorne, writes Wineapple, nursed a dark,  critical view of life, observing that his Scarlet Letter was “a h-ll fired story, into which I found it almost impossible to throw any cheering light.”  His refusal to endorse the abolitionist cause (on which point Wineapple provides a new reading of The Blithedale Romance) and his opposition to the Civil War led detractors to say that he stood for ‘doubt, darkness, and the Democratic Party.’ More difficult, Wineapple writes with much sympathy, were his relations with his children, who bore the burden of his fame and genius over the course of their troubled lives.

Wineapple navigates the high tides and chill undercurrents of Hawthorne’s fascinating life and work with clarity, nuance, and insight, all the while protecting the dark unknowable core that is quintessentially Hawthorne.  In him, the quest of his generation for an authentically American voice bears disquieting fruit.

Praise for Hawthorne: A Life

“A vivid, almost cinematic portrait.  Brenda Wineapple blends impressive scholarship with fine literary skills. Her Hawthorne succeeds brilliantly in clarifying our understanding of a sometimes shadowy figure who remains, despite fad and fashion, close to the core of our national heritage in fiction.
—Arnold Rampersad, Pulitzer-prize winning author of Ralph Ellison

“Richly detailed and nuanced: a model of literary biography, and an illumination for students of Hawthorne’s work.”
—Kirkus (starred review)

“Wineapple never ceases to probe the artistic processes behind such masterpieces as The Scarlet Letter and The House of Seven Gables. A portrait both convincing and memorable.”
—Booklist (starred and boxed review)

“A thoroughly engrossing story of a writer’s life… written with novelistic grace and flow, with an eye to the telling detail and apt quotation.”
—Dan Cryer, New York Newsday (and selected for the Best Books of 2003)

“A brilliant, powerful, nervy, unsettling, and riveting book. With the possible exception of Herman Melville, no one has ever understood the grand, tragic Shakespearian nature of Hawthorne’s life and work as well as Brenda Wineapple.”
—Robert D. Richardson, author of Henry Thoreau: A Life of the Mind and Emerson: The Mind on Fire

“Clearly the best biography of Hawthorne, the Hawthorne for our time.  Beautifully conceived and written, it conveys the full poignancy and complexity of Hawthorne’s life.  A delight to read from start to finish.”
—Sacvan Bercovich, Cabot M. Powell Research Professor, Harvard University

“Brenda Wineapple’s Hawthorne is, quite literally, an electrifying life.”
—Benita Eisner, author of Byron: Child of Passion, Fool of Fame 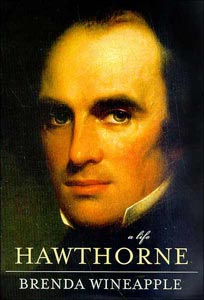