A beloved figure in his own era—a household name for such poems as “Barbara Frietchie” and “The Barefoot Boy”—John Greenleaf Whittier remains an emotionally honest, powerfully reflective voice. A Quaker deeply involved in the struggle against slavery (he was harassed by mobs more than once) he enlisted his poetry in the abolitionist cause with such powerful works as “The Hunters of Men,” “Song of Slaves in the Desert,” and “Ichabod!”, his mournful attack on Daniel Webster’s betrayal of the anti-slavery cause.

Whittier’s narrative gift is evident in such perennially popular poems as “Skipper Ireson’s Ride” and the Civil War legend “Barbara Frietchie,” while in his masterpiece “Snow-Bound” he created a vivid, flavorful portrait of the country life he knew as a child in New England. “His diction is easy, his detail rich and unassuming, his emotion deep,” writes editor Brenda Wineapple. “And the shale of his New England landscape reaches outward, promising not relief from pain but a glimpse of a better, larger world.”

“John Greenleaf Whittier’s Selected Poems, edited by Brenda Wineapple, will come as a revelation to anyone who was force-fed Whittier in school and never turned back to him. I had an eighth-grade teacher who recited “Snow-bound” with such dull zeal that I decided it was the most boring poem in American literature. Wineapple had a similar experience. “Later I realized I had been too young for the poem,” she writes in a marvelous introduction, “and now I suspect that all the schoolchildren subjected to Whittier’s assurances are themselves too callow to understand, never mind care, how memory fends off the mindlessness of winter.” We had no idea Whittier was summoning a lost rural world against encroaching blankness, a world whiting out, ‘coldness visible.’”
—Washington Post Book World

“As Wineapple has discovered, there is a freshness and honesty to be found in a revisited Whittier.”
—Boston Globe 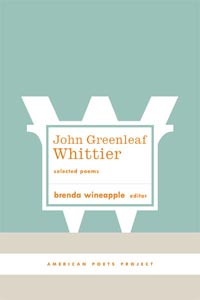