Americans, expatriates, virtually orphans, Gertrude and Leo Stein lived together almost forty years collaborating in one of the great art and literary adventures of this century, and this book tells a story of that venture—and the relationship of sister and brother making it possible.  For with a personality that drew people toward her, regardless of what they thought of her inventive, hermetic prose, Gertrude Stein dazzled and perplexed.  And Leo Stein dazzled, too, in his own way: enigmatic, intelligent, and self-absorbed, he was one of the most crucial figures in Gertrude Stein’s early years and the original guiding spirit of the famed salon at 27, rue de Fleurus.

But crippled by his own ambition, he was doomed to failure, unlike his brilliant sister, who, from her early days as a medical student to her first days in Paris, was passionately driven toward a career in which she distinguished herself, demanding appreciation as a exceptional writer who knew precisely what she wanted.  And the passion with which she expended on her work was a measure of what it meant to be a woman, a lesbian, an experimental writer and a Jew at the turn of the century.

With its wealth of new and rare material, including a heretofore unknown manuscript by Gertrude Stein, with its precise reconstruction of the famed art collection at the rue de Fleurus, and with its dashing array of characters—from Bernard Berenson to Pablo Picasso—this dual biography of Gertrude and Leo Stein offers the first glimpse into the relationship of two of the century’s most unusual and influential figures, who collaborated in one of the great art and literary journeys of this century.  It is also a tale of success and failure, of experimentation and conservatism, of modernism and of a sibling rivalry that smoldered for forty years until, in 1914, the Steins broke up their household, separated, and never spoke to one another again.

“A riveting joint profile of Gertrude and Leo Stein… A wild, Fauve-like canvas of a time before emotional color was muted by Prozac.”
—M. G. Lord, Elle

“Sister Brother is a luminous, harrowing achievement for which all students of literature and art, as well as of families! are in Brenda Wineapple’s debt.”
—Richard Howard

“Brenda Wineapple brilliantly disentwines the record of Stein’s life from the image of it that Stein and her allies created.”
—The San Francisco Chronicle

“Sister Brother is a beautifully even-handed and penetrating treatment.  This biography is indispensable for students of Gertrude Stein and of modernism, and will be a delight to lovers of art and to all those interested in what Wineapple calls ‘the romance of families.’”
—The Toronto Globe and Mail

“Wineapple’s book explores their partnership with humor and panache.  Not the least of its virtues is that, while paying ample homage to Gertrude, it does justice perhaps for the first time at length and in detail, to Leo. … Scrupulous, sensitive, marvelous… and moving.”
—Daily Telegraph 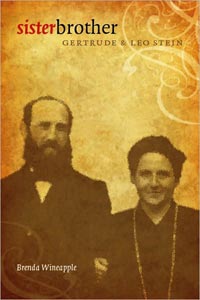