Essays, letters, poems, prose, and excerpts of interviews by 28 leading writers from throughout the century, including Ralph Waldo Emerson, Sojourner Truth, Edgar Allen Poe, Herman Melville, Henry Adams, Fanny Fern, William James, Fracer Harper, and many others. Though distinctive, these writers each had to figure out what self-reliance meant for them individually within the larger context of a relatively new country where the literature was becoming defined as “American,” even though such a label meant different things to different writers at different times. Whether they had been enslaved, or trained as preachers, or women, or descended from presidents, the writers in this collection give early illustration to the rich tapestry that was already a cultural melting pot. In a century defined at home most notably by the Civil War and abroad by an emerging industrial revolution which would position America on a world stage, each writer grappled with what it meant to be a uniquely American writer in a nation just coming-of-age.

Read a version of the introduction in American Scholar 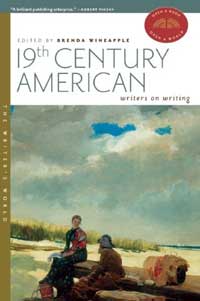