NAMED ONE OF THE BEST BOOKS OF THE YEAR by

THE IMPEACHERS: The Trial of Andrew Johnson and the Dream of a Just Nation

Praise for The Impeachers: The Trial of Andrew Johnson and The Dream of a Just Nation

“A stunningly well-timed book on a question ripped from the headlines.”
—Washington Post

“[A] riveting and absorbing book… Wineapple’s depiction of Johnson is so vivid and perceptive that his standoff with Congress arrives with a doomed inevitability. …Wineapple dips into the intrigue and the whiffs of corruption that surrounded the vote, including a cloak-and-dagger narrative that features incriminating telegrams. She brings the same feel for drama to the trial itself…. A noble conclusion to an illuminating book.”
—New York Times

“Ms. Wineapple’s gift for portraiture, is on display as she sets out her cast of characters… The first instruction to draw from “The Impeachers” is the importance of stakes. “
—The Wall Street Journal

“Wineapple writes the kind of popular nonfiction that deserves a wide audience, blending graceful prose with a deeply researched but accessible history. …‘The Impeachers’ offers insights and a distillation of events that have undeniable parallels with this moment in our history.”
—Christian Science Monitor

“A gifted stylist whose knowledge of the politics of Reconstruction is both intimate and vast. In The Impeachers, [Wineapple] tells an elegant story stuffed with alluring character sketches and dramatic moments, both legal and political.”
—The New Republic

“Approachable, dramatic, event riveting, Wineapple’s volume is both guidebook and cautionary tale for our times.”
—The Boston Globe

“Fans of Doris Kearns Goodwin’s Team of Rivals will appreciate how Wineapple’s narrative carries forward the saga of the men Lincoln so relied on during the Civil War.”
—Booklist (Starred Review)

“[Wineapple’s] arguments are novel and her prose lively…. This book has much to offer enthusiasts of both historical and contemporary American politics.”
—Publishers Weekly (Starred Review)

“Brenda Wineapple has written a book entirely right for its moment, a history of the perils and politics of impeachment … Not merely the story of a trial (and likely associated corruption), engrossing though that is… this is a story about race in American politics.”
—The Guardian

“Much as Doris Kearns Goodwin did in her acclaimed book, “Team of Rivals,” Wineapple brushes the patina of a century from the politicians, cabinet members, lawyers and power brokers involved in the attempt to remove a vile and unelected chief executive from office.”
—Lincoln (NE) Journal Star

“In this superbly lyrical work, Brenda Wineapple has plugged a glaring hole in our historical memory through her vivid and sweeping portrayal of President Andrew Johnson’s 1868 impeachment. She serves up, not simply food for thought, but a veritable feast of observations on that most trying decision for a democracy: whether to oust a sitting president. Teeming with fiery passions and unforgettable characters, The Impeachers will be devoured by contemporary readers seeking enlightenment on this issue. A landmark study.”
—Ron Chernow, Pulitzer Prize winning author of Grant

“The past, as William Faulkner taught us, is never dead; it isn’t even past. In this absorbing and important book, Brenda Wineapple recounts the titanic struggle over the implications of the Civil War amid the impeachment of a defiant and temperamentally erratic American president: Andrew Johnson. Readers seeking to make sense of the perennial national tension between hope and fear will find much to ponder in these pages.
—Jon Meacham, Pulitzer Prize winning author of The Soul of America

“With scholarly authority and literary grace, Brenda Wineapple has written the best account we have of the impeachment and trial of Andrew Johnson. The Impeachers clarifies, as only a responsible historical work can, an increasingly urgent public question: by what standards ought Congress to consider impeaching and removing a sitting president?  As ever, Wineapple’s work exemplifies how objectivity need not come at the expense of dramatic engagement, let alone shrewd personal and political judgments.”
— Sean Wilentz, George Henry Davis 1886 Professor of American History, Princeton Univ.

“This is a terrific book. In The Impeachers, Brenda Wineapple ‘s wide-ranging research, her astonishing skill at painting vivid word portraits, and her masterful story-telling combine to turn one of the least-understood events in American history into the momentous, suspenseful national drama it really was. Not to be missed.”
— Geoffrey C. Ward, author of A First-Class Temperament: The Emergence of Franklin Roosevelt

“The Impeachers is a historical barnburner of a book—a vivid cast of characters caught in a terrifying—and eerily familiar—moment in our nation’s history.  This is history of the best kind—passionate, evocative, razor-sharp, and relevant.”
—Nathaniel Philbrick, author of In the Heart of the Sea 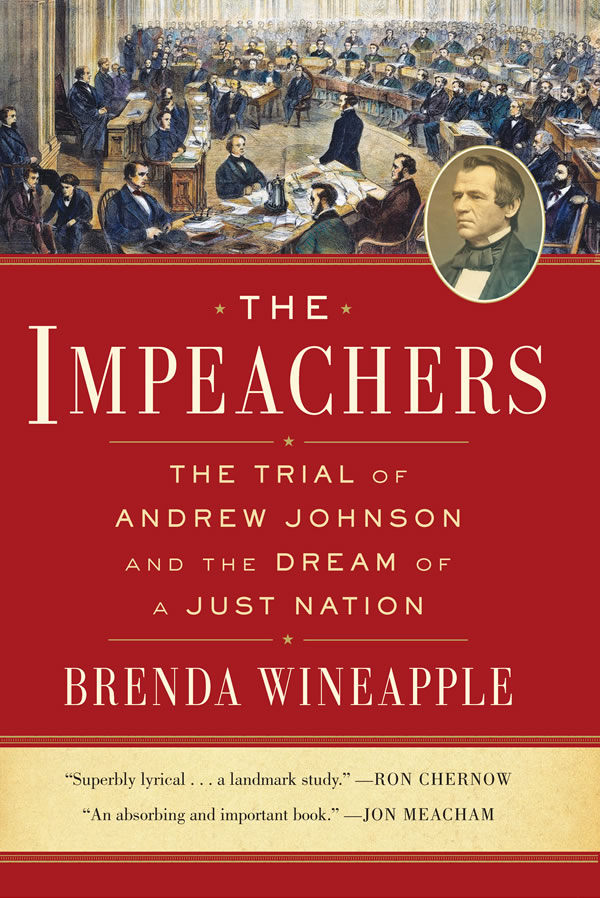 Brenda Wineapple’s THE IMPEACHERS is featured in the Spring 2019 issue of The American Scholar. The magazine includes an excerpt of the new book about the impeachment of Andrew Johnson.