“One of the most astonishing books about poetry I have ever read.”
–Franz Wright

A radiant portrayal of one of the most remarkable friendships in American letters—between the elusive, original poet and the radical abolitionist, reformer, and writer whom we have to thank for the publication of Emily Dickinson’s poetry.

Brenda Wineapple re-creates the extraordinary, delicate connection between these two wildly dissimilar personalities, giving us new insight into the correspondence between them, which lasted almost a quarter of a century, a correspondence that included nearly one hundred of Dickinson’s dazzling, unseen poems. We see how Colonel Thomas Wentworth Higginson, in his dual role as friend and literary adviser, counseled her against publishing, suggesting that her poetry was too unconventional, defiant, and unpredictable. And we see how, after her death, he himself coedited the first editions of her poetry—changing her distinctive punctuation—and watched them become immediate bestsellers.

Emily Dickinson and Thomas Higginson met face-to-face only twice (“I never was with any one who drained my nerve power so much,” he said), but Wineapple makes clear that their friendship nonetheless throws a brilliant light both behind the hidden door of the poet’s nimble imagination and into a corner of the noisy century that she and Colonel Higginson shared.

White Heat is a book about poetry, politics, love, and commitment; it is, as well, a story of seclusion and engagement, isolation and activism—and the ways in which they were related and separate—in the roiling America of the nineteenth century. 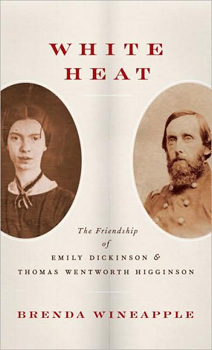 “A dual biography of astonishing depth and grace.”
—Boston Globe

“Brilliant…. Wineapple elegantly delves into a life and offers rich insights into a little-known relationship between two of the late-19th century’s most intriguing writers.”
—Publishers Weekly (starred review)

“A moving portrait of two unalike but kindred spirits who did indeed ‘Dare [to] see a Soul at the White Heat.’”
—Kirkus Reviews (starred review)

“Brenda Wineapple, a superb literary critic, has a historian’s soul. In White Heat, she beautifully describes the quiet drama and elusive tempos of one of the most improbable and fateful authorial friendships in all of American writing. Few contemporary interpreters, if any, could have understood the story in all its richness as Wineapple has—and then related it with such grace as well as authority.”
—Sean Wilentz, author of The Rise of American Democracy: Jefferson to Lincoln

“Toeing the circumferences of biography and literary criticism, Brenda Wineapple has done an admirable and eloquent job of unraveling this intriguing chapter in the Emily Dickinson story, but always with respect for the mystery of compatibility at its core. No book I know brings us deeper into the inner chambers of this poet’s private life.”
—Billy Collins, former poet laureate

“Brenda Wineapple tells the story of how this mis-matched pair grew dependent on each other. It is one of the strangest stories in American literary history–poignant, exasperating, moving–and Wineapple tells it with a rare brio and authority. White Heat is biography at its very best. It brings these two to life more exactly, more sympathetically, more vividly than ever before. A triumph!”
—J.D. McClatchy, poet, librettist, and editor of Yale Review

“In her trenchant, memorable narrative of Dickinson’s quarter-century entanglement with Higginson, Wineapple takes us into the “white heat” they generated together, a synergy that made their cold New England souls immeasurably warmer.”
—Esther Schor, Times Literary Supplement

“A brilliant account of one of the oddest literary friendships in American history.”
—Foreign Affairs Magazine

“A tour-de-force that should delight specialists and casual readers alike.”
—Washington Post

“Much more than a biography—rather, a sweeping cultural and political history of the lead-up to the American civil war and its aftermath… A portrait which provides close-up moments of tangible intimacy while allowing the subject to remain ultimately mysterious.”
—The Economist

“Wineapple is an astute literary biographer with a feisty prose style and a relish for unsettling received ideas. Social history—the taproot of character—is her forte…”
—The New Yorker